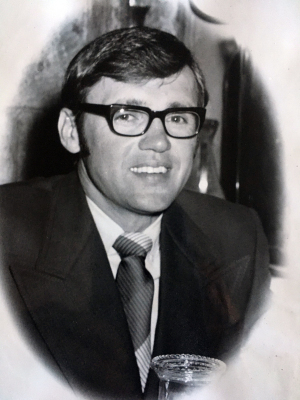 Sam was predeceased by his wife and love of his life Marianne, his son Stephen and sister Marj.  Dad was born in Regina and spent his younger years in Moose Jaw, Saskatchewan.   The family moved to Calgary in the late 40's where he attended Crescent Heights High School and met a number of school mates who would become lifelong friends.  Upon graduation Sam dove into the then booming oil and gas industry.  Starting at pretty much the bottom, Dad, through his hard work and smarts worked his way into numerous senior management positions.   It was at Voyager Petroleum where he met Marianne and somehow convinced her to marry him - along with a car full of kids, Sandie, Jamie, David and Stephen.  During his career Sam was very active in the Canadian Association of Petroleum Landmen, often traveling to conventions with Mom always at his side.  Sam finished up his formal career at Suncor but spent many more years consulting as well as participating in a small private oil and gas company.

A long time member of the Glencoe Club, Dad played tennis, golf and squash - with squash being his true passion.  He was extensively involved with both Squash Alberta and Jesters Squash.  His endlessly positive outlook, wit and sarcasm will be dearly missed.  Sam is survived by children Sandie Safton and partner Peter Cowan, Jamie Safton, David and Kimberly Safton, John Edwards and Maggie Edwards.  He leaves behind numerous grandchildren and one great grandchild.

To send flowers to the family or plant a tree in memory of Samuel John Safton, please visit our floral store.

You can still show your support by sending flowers directly to the family, or by planting a memorial tree in the memory of Samuel John Safton