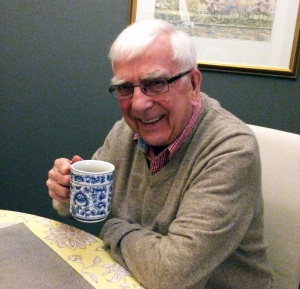 On September 9, 2020, Nelson Michael Saunders left us. He is survived by his loving wife, Barbara and his children, Eugene and Bridget (Mike).

In 1961, on the final leg of a six-week spring ski vacation, Nelson met Barbara. The two quickly discovered they shared the same adventurous spirit and had mutual friends. After a brief courtship, Barbara and Nelson were married October 27, 1962.

In 1963, Nelson qualified for an academic scholarship to attend the University of Oregon to study science. A son, Eugene, and daughter, Bridget, were born in Oregon before the family returned to Calgary, where Nelson began his teaching career with the Calgary Catholic School Board.

Nelson completed his 25-year career as an educator in 1993. In his time as a teacher, he earned two master's degrees and built many lovely relationships with his colleagues and students. Nelson coached football (his favourite), wrestling, track and field, gymnastics, swimming, and golf, among other sports.

Nelson was an innovator in the Calgary school system. He worked to modify sports equipment to allow kids within the special education program better access to sport and nature. He was a key member of the first group of educators hired to create the new independent learning concept high school called Bishop Carroll; and Nelson introduced the practices of yoga and meditation to his students and launched the first ski program for high schools.

Nelson was an active volunteer for the Calgary Catholic Teachers Association and was an official with the Canadian Canoe Association and really enjoyed his time as a member of Calgary’s Booster Club.

Nelson was a man of many interests, including renovation projects, travelling, gardening, sports, music (especially jazz), opera, theater, reading the newspaper and keeping up to date with his friends and family. In retirement, during “happy hour” with Barbara, there were many fun times, often shared with friends or family.

Nelson was the last sibling of a Saunders generation that included siblings Margaret, Tom, Elizabeth (Bess), William (Bill), Eleanore, Hazel and Francis. Nelson enjoyed being an uncle to his 31 nieces and nephews and their families.  He cherished every family event, and enjoyed catching up on the lives and interests of his relatives.

Nelson was kind, humble and much loved.

An Open House will be held on Saturday, September 19, 2020 at Evan J. Strong Funeral Services (5502-2nd Street SW) between 2:00-4:00pm. The facility can safely accommodate 50 people. Relatives and friends are invited to come with masks for a short, Covid sensitive visit with Nelson's family (no food or beverages served).

In lieu of flowers, donations to the Mustard Seed or the Alberta Adolescent Recovery Centre would be greatly appreciated.

To send flowers to the family or plant a tree in memory of Nelson Michael Saunders, please visit our floral store.