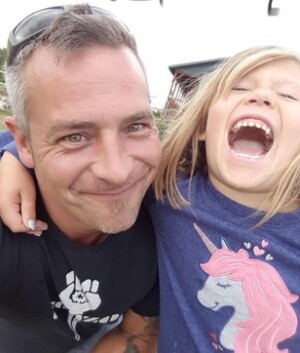 With heavy hearts we announce the unexpected passing of Marc Fehr of Sylvan Lake, AB on December 28, 2020 at the age of 44.

Marc is survived by his daughter, Porter, and her mother Lindsey; his parents, Wayne & Janice Fehr; brother Chad Fehr (Kristi) and their children Kaija and Caden; sister Kim Johnson (Will) and their children Jessica (Jared), Emily (Dylan & daughter, Scarlette), Joshua, and Jeré; as well as many aunts, uncles, and cousins.

Marc was born on February 7, 1976. He spent his early years in Melfort, SK before moving to Duck Lake in grade 5 and later to Saskatoon in grade 9. In each location, he met many life-long friends whom he enjoyed staying in contact with through social media and the occasional trip back to Saskatchewan. Marc had many fond memories as a result of these friendships and thoroughly enjoyed reminiscing about past escapades.

Marc returned to school twice as an adult. His first passion was writing and toward that end, he attended the Vancouver Film School. He later took great pride in attaining his Red Seal in both plumbing and heating. He recently told his parents, “I can barely imagine a profession more suited to my qualities… it all makes sense, and one major advantage is how far outside the box my mind can go”. Marc clearly thrived in his chosen occupation as there was always a new challenge and his days were varied. He was a thinker and a tinkerer. Well-known for his critical analytic skills, Marc was a very intelligent man who loved a mental workout.

While Marc lived in many locations through his adult years, it was Sylvan Lake that caught his heart. Long days and lazy evenings on the beach with his daughter and their many friends were a source of comfort and enjoyment for him. He also had a great love for stand-up comedy. A man well known for his quick wit and dry humour, Marc could get and keep people laughing for hours.

Above all, Marc’s pride and joy was his daughter, Porter Jayne, and Marc was without a doubt, a remarkable dad. His time with PJ meant the world to him. When he wasn’t with Porter, he was thinking about her and when he was with her, he was truly and completely present; his time with PJ was cherished. Every move he made was to better himself to be the dad she deserved. And he rocked it.

Marc’s family has been strengthened by his many friends who, despite their own grief, have reached out to offer their condolences and support. Seeing the inherent goodness in the people he chose to surround himself with is a true testament to the man Marc was. We are ever thankful for their presence in his life.

Due to COVID restrictions, there will be a private viewing in Calgary with internment to take place at a later date.

To send flowers to the family or plant a tree in memory of Marc David Fehr, please visit our floral store.