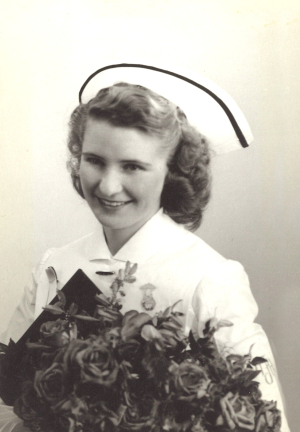 With sadness the family wishes to announce that Dorothy “Joan” Casey, 93, of Calgary passed away on February 21, 2021 in Calgary, Alberta. Joan, the youngest sole surviving of 12 children, was born in Prince Albert, Saskatchewan to Laura and Norman Russell on August 16, 1927.

She attended the same elementary school as her future husband Arnold until grade 5, so the attraction must have started early. After grade 12, Joan earned a Nursing Diploma at Holy Family Hospital. Her nursing career continued until she had children, after which she was a Relief Nurse with the Victorian Order of Nurses. Years later, Joan returned to nursing at the Calgary General Hospital, until her retirement.

She married Arnold Casey in 1949 and then spent time in Scotland, where Arnold played professional hockey with his brother, Rowe. Joan and Arnold returned to Prince Albert where they started raising a family of five. In the following years they moved to Edmonton, and then finally settled in Calgary.

Joan was very active in the community. For numerous years she was the Education Coordinator, volunteering to organize a multitude of classes and events.  She had many hobbies: sewing, piano playing, millinery, oil painting, gardening, hiking, downhill and cross country skiing. She said her retirement “job” was investing and she was keenly interested in it, and in politics. Joan loved her many worldly travels, supported many charities, and was well known for her grounded attitude, adventurous spirit and endearing spunk. In a memoir she wrote when she was 76 years old, she said she wished she had gone white water rafting – which she finally did with her family at her 90th birthday party. Her memoir listed her greatest joys as - her children and her hideaway in the mountains of Canmore.

She was predeceased by her husband, Philip Arnold Casey in 1979.

The family extends appreciation to the excellent, caring staff at Foothills Unit 102, and the Palliative Care team, as well as the helpful staff at Evan J. Strong Funeral Services.

A funeral mass will be held at St. Mary’s Cathedral at a later date when the weather and the pandemic have improved – when we can hug, laugh and savour the good memories and love she left in our hearts.

Donations may be made to the charity of your choice.