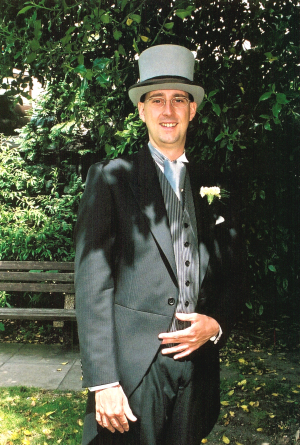 “Man cannot discover new oceans unless he has the courage to lose sight of the shore.”  ― Andre Gide

Cherishing the memories of a life devoted to adventure, we sadly share the news that Carl Nigel Pickin unexpectedly passed away at home in Calgary, AB on December 29, 2020.

Carl was born on November 5, 1966 in Congleton, Cheshire in England. The second child to John and June Pickin, Carl’s childhood was filled with the joy of the English countryside, the love of his parents, and the laughter of his beloved elder sister Deborah.

Carl’s adventurous nature would not keep him tied to his home in England. Youthful trips to Europe with family and friends encouraged Carl’s love of travel. His later academic and career successes took him to Japan where he met the love of his life, Sevtap.  Soon, they embarked on the greatest adventure of all: the uniting of hearts.

Carl and Sevtap’s shared love of adventure took them around the world: diving in the Maldives, sailing in the Aegean, dining on street food in Thailand and fine cuisine in Austin.  Their mutual love of mountains, lakes, forests, and wildlife eventually brought them to western Canada. In the last three years, Carl and Sevtap stopped working full-time to share their days between Calgary, their vacation home in Texas, and Sevtap’s home country of Turkey.  As they sailed the Mediterranean, Carl dreamt of further adventures sailing around the world.

Carl’s adventurous spirit was accompanied by a deep intellectual curiosity.  His love of mountaineering, diving, sailing, and flying didn’t stop at the surface level: he wanted to explore the underlying science of those adrenaline-inducing challenges.  A life-long learner, Carl had recently begun to study robotics and delve into the awe-inspiring beauty of astrophysics.  He shared his enthusiasm and knowledge as a member of Homebrew Robotics Club, Calgary Power and Sail Squadron, Calgary Flying Club and Olds-Didsbury Flying Association. Through his photography, he shared the beauty of his adventures – the mountains, beaches, and sunsets -  as well as the beauty of his beloved Sevtap.

Carl’s intellectual adventures led him beyond received wisdom and religious clichés.  He adored the work of those who dared to state that the beauty and power of science and philosophy was enough to fill a lifetime of adventure and meaning.  But despite some distain for tradition, Carl couldn’t resist indulging in the joys of Christmas and the comforts of home and family.

Carl will be remembered with love by his wife Sevtap and her family: her mother, Guler Sapmaz, and her brother, Ozgur Sapmaz, and his family. Although Carl’s parents have passed away, Carl’s sister Deborah will continue to keep the joyous family memories alive. Carl’s friends and colleagues around the world will always remember him as an accomplished professional, and enthusiastic adventurer, and a caring humanist.

A private memorial service will be held at Evan J. Strong Funeral Services on Saturday, February 13, 2021 at 11:00 followed by a cremation service on Sunday, February 14, 2021. Carl’s ashes will be taken over the Rockies to reunite with nature in the winds of the mountains.

"Feather to fire, fire to blood
Blood to bone, bone to marrow
Marrow to ashes, ashes to snow”
― Gregory Colbert

In lieu of flowers, please send donations to  the Heart And Stroke Foundation of Canada (www.heartandstroke.ca) or the Sea Shepherd Conservation Society (www.seashepherd.org)

Video of the funeral service is available below.

To send flowers to the family or plant a tree in memory of Carl Nigel Pickin, please visit our floral store.

Your browser does not support this video format. You should be able to view it in Chrome, Safari or Internet Explorer.